Purdue University Construction Engineering Student – Lance Kennedy contacted Kramer Companies having learned about our Mentorship Program. He specifically wanted to learn more about what it takes to be an Owner Rep, and how much it differed from other well-known project delivery methods such as Construction Management (at risk), Design/Build, General Contracting, Etc.

Lance is a quick study and a very impressive young man. He immediately took to the concept and stated (paraphrasing), “WOW, I really had no idea. This is a great service!”. Lance was first introduced, and admittedly, overwhelmed by the base requirements for becoming an Owner Rep, but walked away with a clear understanding that the most critical of all requirements is knowledge and establishing complete independence.

Lance is a junior at Purdue University and lives in Chicago. We look forward to following him on what appears to be a very promising path.

We are also proud that Lance found what he was looking for, right here, in Hendricks County.

Use of Drones in Construction Inspections 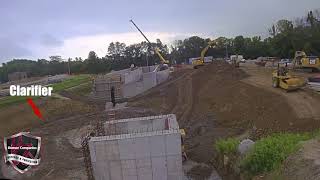 Out with the old, in with the new!

What is the best project delivery method?

The Town of Brownsburg continues to grow as two new outpatient centers develop off of 56th St.